Location: The primary nesting sites in French Guiana are located at Awala-Yalimapo, along the Point-Isère / Organabo coastline, and at the urban sites of Kourou and Cayenne

Objectives: The mission of WWF-Guianas is to conserve nature and ecological processes, to seek the sustainable use of natural resources, and to promote the reduction of pollution and wasteful consumption while recognizing and respecting human needs and livelihoods. Since French Guiana’s Awala-Yalimapo Beach is historically considered the single most important nesting site for endangered leatherback turtles in the world, the conservation of this habitat is essential to species survival. The high density nesting also provides the opportunity for eco-tourism through turtle watching tours and research and data collection.

Ordered by the French Ministry of Ecology, Energy, Sustainable Development and Territorial Planning (MEEDDAT), the recovery plans aim to conserve one or several animal species considered endangered on a national or international scale. Today, approximately twenty species are covered by recovery plans throughout French territory. Click here for more details.

Since 1998, Kwata NGO has been leading a conservation program on the sea turtles nesting in the eastern part of French Guiana, around Cayenne city. The program includes the monitoring of turtle populations, awareness activities, preservation of nesting sites and direct conservation actions.

The nesting sites are an alternance of sand, mud and rocks. In comparison to the other nesting sites of French Guiana, the eastern sites have the peculiarity of a direct closeness to urbanized areas. The beaches are well known for the sea turtle nesting watching, but nesting sites are also used by the local populations for leisures, sports and popular events. They are also threatened by a poorly controlled urbanization.

Since 1998, 3,000 to 7,000 nests of Leatherback turtles (Dermochelys coriacea) and 1,000 to 3,000 nests of Olive Ridley turtles (Lepidochelys olivacea) are recorded yearly. For the latter species, the area is probably one of the biggest nesting site in the whole South America.
Since 1998, Kwata NGO has been monitoring the nesting activity of leatherback turtles, using Passive Integrated Transponder (PIT). The monitoring of Olive Ridley turtles has been implemented since 2001, and marking with PITs is in place since 2003.

Studies of molecular ecology and conservation genetics of the Ridley and the Leatherback is in course since 2007.

The presence of volunteers (about 35) and employees (6) during more than 1,000 hours per nesting season is an efficient way of preventing poachings and attacks by dogs. Kwata team rescue endangered females caught by coastal nets or lost on the beaches because of the pollution by lighting.

On the beaches
Every year, 7,000 to 10,000 persons come on the beaches to watch the nesting of sea turtles. Half of them meet the Kwata team which dispenses behaviourial informations for people and answers the questions on marine turtles. The team also watches over the nesting and hatching process to prevent inadequate behaviours.

Kwata NGO has got a little house on the beach, where people can find many informations and exhibitions dealing with sea turtles. Educative tools are put at children’s disposal and many activities occur during the nesting season : body painting, artistic activities, tales, meetings… From 3,000 to 5,500 persons are welcomed each year.

Actions with other stakeholders and decision makers
Kwata NGO is sollicited to provide some technical advice where sea turtle are concerned (in case of a new urban developpement project for example), and provide alternative for low impact developments. Private partnerships also exist with hotels, restaurants,
Governmental organizations, local politics, are also key stakeholders and focused attention.

Chevalier, J. and M. Girondot. Marine Turtle Identification in French Guiana: Why, Where And How? 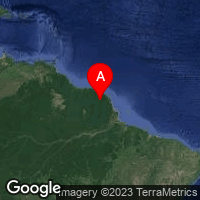