Driving on sandy beaches (especially narrow or steeply sloping beaches) can seriously degrade the coastal environment by damaging beach vegetation, compacting sand, crushing incubating seabird and sea turtle eggs, creating deep ruts and tire tracks that can trap sea turtle hatchlings trying to reach the sea, and accelerating erosion, potentially resulting in the loss of nests to the sea. Vehicles can also strike and kill hatchling seabirds and sea turtles, and frighten females away from nesting. Sea turtle hatchlings huddled just below the surface of the sand (waiting to emerge later in the evening) are not visible and are particularly vulnerable to being crushed by passing vehicles.

Solutions!
Ideally – and with the exception of authorized patrol or emergency vehicles – motorized vehicles should not be allowed to drive on sandy beaches except at authorized boat haul-out sites. In recognition of the potential impacts of beach driving, most areas that allow this practice regulate it in some way. Surfrider Foundation summarizes these regulations as follows:

requiring licenses or passes
limiting the number of vehicles on the beach
limiting beach driving to certain types of vehicles (e.g., 4-wheel drive)
enforcing speed limits
specifying beach access ramps and the allowed driving zone along the beach
prohibiting driving on dunes an in other ecologically sensitive areas
prohibiting driving during certain times of the year, such as during seabird or sea turtle nesting seasons or when beach pedestrian traffic is so high that vehicles on the beach would represent a safety hazard 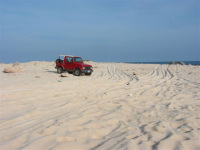 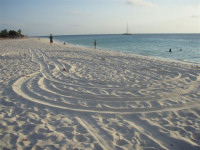 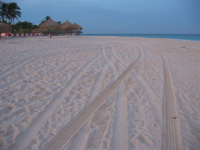 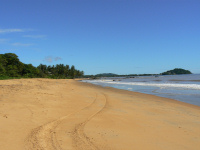