You are here: Home / Why Ecotourism?

The importance and value of sea turtles as tourist attractions and as a component of the tourism product of many destinations around the world is increasing as the industry seeks to enrich the traditional “sun, sea, and sand” experience, as the geographical reach of tourism extends into regions that involve more encounters with wildlife, natural areas, and local people, and as tourism conceptually expands – such as with “ecotourism” and “community-based tourism” – to encompass the direct involvement of local communities and generation of benefits both to the environment and to grassroots economies.

With this increasing demand for turtle experiences comes the need to develop and disseminate principles, standards, and operational models so as to ensure that, at a minimum, turtle-oriented tourism ventures do not adversely impact sea turtles, their populations, or their habitats and, at best, actively contribute to meeting both their conservation needs and those of local communities. WIDECAST has risen to this challenge, having developed a comprehensive Caribbean Handbook, currently undergoing international peer-review, for the turtle tourism industry.

Most nesting occurs in tropical and sub-tropical latitudes where sandy beaches are actively used by communities and investors for settlement, recreation, and infrastructure improvements, thus bringing the needs of sea turtles in direct conflict with the aspirations of people, governments, and societies. In less developed areas, sea turtles face more traditional threats and conflicts, such as with fishers, hunters, and poachers targeting the resource for food and other products. In either case, sea turtle eco-tourism programs can both enhance the quality of life for residents (or vacation experience for visitors) and contribute meaningfully to local economies. This is particularly true when community-managed tour services enable residents to move away from extractive uses while at the same time improving their livelihoods.

A growing number of examples of turtle-based tourism around the world are offering insights into its risks and benefits, as well as its potential for successful application. WIDECAST, with its mission of achieving a balanced co-existence between sea turtles and people, has been heavily involved in designing and supporting many of these initiatives in our region. Our experience thus far has demonstrated that significant direct and indirect benefits for both conservation and local communities can accrue from such ventures, particularly when they result in a greater sense of stewardship toward the coastal zone more generally.

The long-term future of sea turtles hinges, we believe, on the degree to which their nesting and foraging grounds can not only be effectively protected – such as from unsustainable patterns of land use and construction, from poaching, and from pollution – but enhanced. While there are many ways to approach this, our current focus is to work in partnership with the Caribbean tourism industry to safeguard critical habitat, and to encourage and to mentor low-impact tourism managed by local communities that reap the economic benefits and become stronger actors in influencing the decisions that affect them and the coastal ecosystem upon which they ultimately rely.

Why sea turtle eco-tourism? The question may be best answered by taking the opportunity to participate personally in a community-led Turtle Watch. Interact with your guide, respect the animals, support the local economy, consider the alternative … make your own choice. 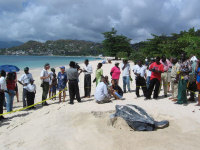 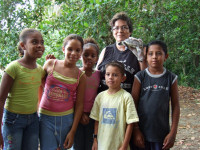 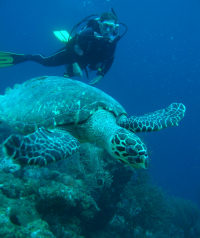 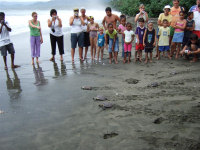 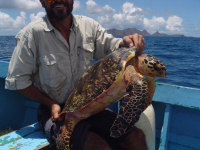 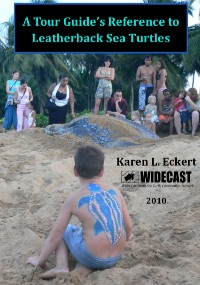 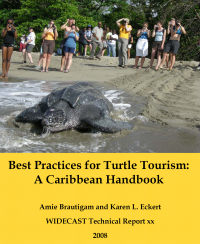 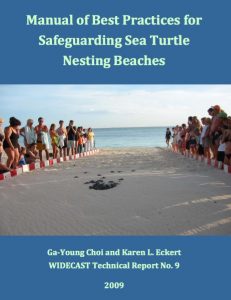