The generic name Eretmochelys (“oar turtle”) was introduced by Fitzinger (1843). The specific name imbricata is attributed to Linnaeus (1766) and refers to the over-lapping nature of the carapace scutes. The common name, hawksbill, refers to the relatively narrow head and bird-like shape of its beak. In the Caribbean basin the species is generally known as carey in Spanish and tortue imbriquée in French.

Adults weigh in at 60 to nearly 200 pounds, averaging 100-150 lbs. Shell length typically ranges from 25 to 35 inches throughout the species’ global range, making it the smallest of the sea turtles, with the exception of the ridleys. Carapace color is “tortoiseshell”, ranging from golden to dark brown with red, black and orange streaks. The posterior (rear) edge is serrated, especially in young animals, and the scutes overlap one another like shingles on a roof. Each flipper usually bears two claws.

Hawksbills are the most tropical of the sea turtles. They are often associated with coral reefs where they specialize on sponges and are sometimes referred to as “spongivores”; the diet also includes minor contributions by other benthic invertebrates. Remarkably, scientists are finding that even when surrounded by dozens of species of sponge, the hawksbill will preferentially feed on only a handful of species, showing a highly refined dietary specificity. Life span is unknown, but sexual maturity in the Caribbean is reached at approximately 25 years of age and tagging projects have recorded individuals nesting for more than two decades. As adults, hawksbills return to their natal beaches to lay eggs. Populations are greatly reduced in the Caribbean region and contemporary nesting occurs at very low densities. Females deposit multiple clutches of eggs, typically at two-week intervals, and nests are often placed in the shelter of beach vegetation. Females do not tend to nest in consecutive years. After leaving their natal beaches, individuals spend several years in the open ocean, becoming widely dispersed by ocean currents before returning to coastal waters as young juveniles. The species is both solitary and migratory, and management is complicated by a landscape of genetically distinct but geographically overlapping populations. Mating often occurs in the vicinity of nesting beaches, there is no parental care of the young.

The hawksbill is a circumglobal species found in tropical and subtropical waters of 108 countries, with nesting occurring in 70 of these (including most Caribbean States and territories). Post-hatchlings and young juveniles are pelagic, while larger juveniles and adults are associated with continental shelf habitat. All life stages are highly mobile.

Hawksbills nest in typically low densities throughout the Wider Caribbean Region; nesting does not occur north of Florida in the USA. According to Dow et al. (2007), only three sites – Mona Island (Puerto Rico), the west coast of Barbados, and Punta Xen (Mexico) – support more than 1,000 crawls per year. Five countries report nesting beaches with between 500 and 1,000 crawls per year, half of these sites are situated along the Yucatan Peninsula in Mexico and the others are located in Barbados, Panama, and the US Virgin Islands. In all, fewer than 5of nesting beaches support more than 100 crawls per year, whereas 52receive fewer than 25 crawls per year and 33have unknown crawl abundances.

Chelonotoxin refers to a form of poisoning that occurs from humans eating sea turtles. Perhaps in the case of the hawksbill it results from toxins associated with sponges that the turtle feeds on, toxins that “bioaccumulate” within its muscle tissue. Such an adaptation would have the advantage of allowing the turtle to not have to expend energy on chemical detoxification, while perhaps providing this small turtle with an alternative form of defense. Effects from consuming hawksbill meat includes nausea, tightness of the chest, difficulty in swallowing, skin rash, a burning sensation around the mouth, lips and tongue, enlargement of the liver, coma and even death.

Recovery Plan for Hawksbill Turtles in the U.S. Caribbean, Atlantic and Gulf of Mexico (US Fish and Wildlife Service and NOAA National Marine Fisheries Service)

Synopsis of Biological Data on the Hawksbill Turtle (FAO)

Status and distribution of the hawksbill turtle, Eretmochelys imbricata, in the Wider Caribbean Region 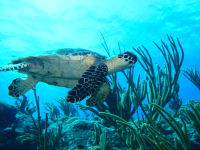 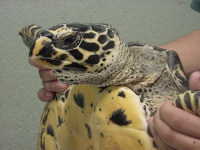 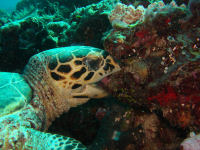 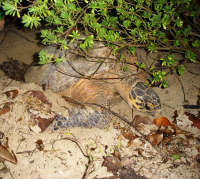 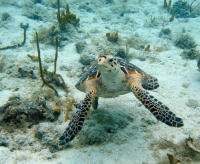 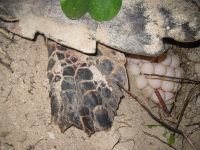 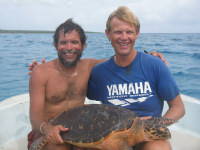 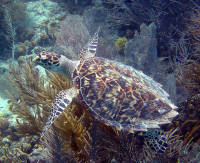