The specific name kempii was introduced by Garman (1880), but in conjunction with the genus Colpochelys. The turtle was apparently named for Richard M. Kemp, a fisherman interested in natural history who submitted the type specimen from Key West, Florida. The species was allocated to the genus Lepidochelys (Fitzinger 1843) when it was realized that the Kemp’s ridley and the olive ridley, Lepidochelys olivacea, were congeneric. The turtle is referred to as the Kemp’s ridley in English, tortuga lora in Spanish, and tortue de kemp in French.

Adult Kemp’s primarily occupy coastal habitats, preferring muddy or sandy bottoms where prey can be found. Their diet consists mainly of swimming crabs, but may also include fish, jellyfish, and an array of mollusks. Nesting occurs mainly in the Gulf of Mexico, where egg-laying peaks from April to July. Females often nest during the day (an unusual trait among sea turtles), and lay only two or three clutches of eggs per reproductive year. Average clutch size is 100-105 eggs per nest; incubation typically spans 45-55 days. Kemp’s ridleys historically displayed a unique synchronized nesting habit similar to that of the olive ridley. Large groups of Kemp’s ridleys once gathered off the nesting beaches of Tamaulipas, Mexico – and elsewhere – a precondition to the mass nesting known as an “arribada,” which means “arrival” in Spanish. Mass nestings have not been seen in the Western Atlantic since the late 1940s, but strict conservation measures (including nesting beach protection and use of Turtle Excluder Devices on shrimp trawls) have contributed to population recovery. Today Kemp’s ridley populations are rising, and soon we hope that females will display the lost habit of arribada nesting. Hatchlings orient to the sea upon emergence from the nest, whereupon they disappear into the Gulf of Mexico (and Atlantic Ocean) and spend their earliest years associated with floating seaweeds and other pelagic shelter. As juveniles they are often seen foraging along the eastern seaboard of the USA, and on occasion in Canada. Reproductive maturity is reached at 7-15 years of age, mating is seasonal, and the females return to their natal beaches to lay eggs.

The species occurs mainly along the Gulf coasts of Mexico and the USA, and the Atlantic coast of North America as far north as Newfoundland and Nova Scotia. It is also reported from Bermuda, Madeira, European Atlantic waters, and the Mediterranean Sea. Nesting is largely confined to the Gulf of Mexico, but is also reported from Florida. According to Dow et al. (2007), there are only three sites known to receive more than 1,000 nesting crawls per year; these are all located in the state of Tamaulipas, Mexico. The majority (61 per cent) of nesting beaches for this species receive fewer than 25 crawls per year.

Status and distribution of Kemp’s Ridley, Lepidochelys kempii, in the Wider Caribbean Region 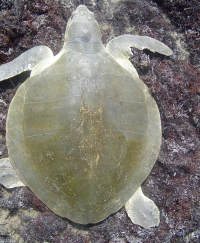 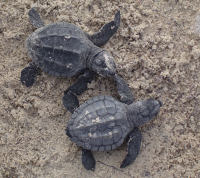 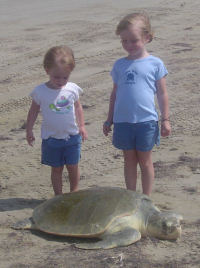 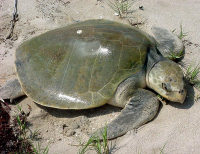 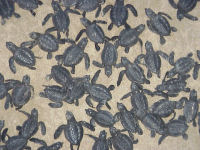