The generic name Caretta was introduced by Rafinesque (1814). The specific name caretta was first used by Linnaeus (1758). The name Caretta is a latinized version of the French word “caret”, meaning turtle, tortoise, or sea turtle. In the Wider Caribbean, the species is referred to as loggerhead in English, cabezona(o) in Spanish, and caouanne in French. The common name “loggerhead” refers to the massive, block-like head.

Adult size varies geographically, with Western Atlantic residents averaging about 250 lb and attaining weights of 400 lb or more, and Mediterranean residents rarely exceeding 200 lb. Typical adult carapace length ranges from 30-42 inches. The relatively large head is diagnostic, and it supports powerful jaw muscles that enable this turtle to effectively feed on hard-shelled prey. The carapace is slightly heart-shaped, the scutes do not overlap one another, and the nuchal scute is in direct contact with the first costal scute on each side. Carapace color is reddish-brown, while the plastron is generally a creamy yellow color. The posterior portion of the carapace is thickest; given its relatively slow swimming speed when compared to other sea turtles, this may provide for additional protection against shark predation. Each limb bears two claws. More than 50 species of invertebrates (such as barnacles, tunicates, sponges, and crabs) have been found associated with the loggerhead’s shell!

In Florida, the largest nesting ground in the Wider Caribbean Region, mating tends to occur between March and June. After mating, males tend to return to their resident foraging grounds. As in other sea turtle species, females are highly fecund. Gravid females nest 3-5 times, sometimes more, at roughly two week intervals during a summer nesting season, depositing about 100 eggs with each nesting. Nesting does not typically occur annually because a female needs time to replenish her strength before she is adequately prepared to enter into another breeding season. Hatchlings in the southeastern U.S. are thought to enter oceanic driftlines composed primarily of the brown seaweed Sargassum, and from there are carried passively on the North Atlantic subtropical gyre to the eastern North Atlantic. After several years of pelagic existence, juveniles, typically 20 25 inches in shell length, return or are returned by currents to the western North Atlantic to become resident benthic feeders on the continental shelf. Growth rate is highly dependant upon ambient temperature, as well as food quality and quantity. The species is highly migratory, and management is challenged by a landscape of genetically distinct but geographically overlapping populations.

Loggerheads are found as far north as Newfoundland and northern Europe and as far south as Argentina, but they have a predominately temperate nesting distribution. They are able to tolerate lower water temperatures than most other sea turtles, with the exception of the leatherback. They are found in coastal, estuarine, and continental shelf waters both in the tropics and subtropics, but undertake transoceanic journeys as young juveniles.

The majority of nesting in the Wider Caribbean Region occurs in the USA (Florida), where all but 1 of 40 beaches identified by Dow et al.(2007) as having greater than 500 crawls per year are located (the other is located in Brazil). Sites reporting between 100 and 500 crawls per year follow the same pattern, being clustered in the northern (Bahamas, Cuba, Mexico, USA) and southern (Brazil) extremes of the region. Forty-one percent of all known nesting beaches support fewer than 25 crawls per year; in 14of sites, data are insufficient to estimate annual crawl abundance.

Status and distribution of the loggerhead sea turtle, Caretta caretta, in the Wider Caribbean Region 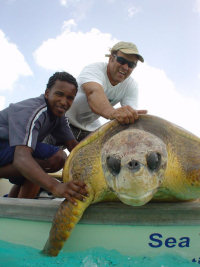 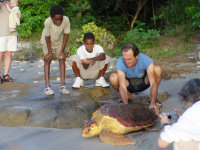 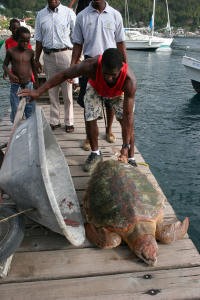 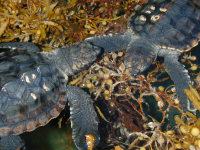