The generic name Lepidochelys was introduced by Fitzinger (1843); the specific name olivacea was first used by Eschscholtz (1829). Lepidochelys comes from a Greek root meaning “scaly”; the olive ridley has the greatest number of “shell scales” (scutes) of any sea turtle. The common name may derive from the typically olive-green color of the carapace. Two species are recognized: L. olivacea and L. kempii.L. olivacea is comparatively rare in the Western Atlantic, but large populations inhabit the Indo-Pacific; hence, the common literature misnomer ‘Pacific ridley’. In Spanish it is known as golfina; in French, tortue olivâtre.

Olive ridleys begin reproducing at 12-15 years of age. In many parts of the world, the olive ridley comes to shore to nest in synchronized emergences of large numbers of turtles, an event known as an arribada. Scientists have yet to conclusively determine the cues for ridley arribadas, but the impetus may involve offshore winds, lunar cycles, and/or the release of pheromones by females. On a global scale the olive ridley is the world’s most abundant sea turtle; however, Atlantic populations are severely depleted and arribadas are no longer seen in our region. In the Wider Caribbean, remnant nesting colonies occur in Suriname, French Guiana and Brazil. Peak nesting occurs from April through August, during which time, on average, one or two nests are laid at 17-30 day intervals. Average clutch size is 105-115 eggs per nest. The young emerge from the natal beach after about two months of incubation and orient instinctively to the open sea. Olive ridleys forage both in shallow coastal waters and in the open sea, where they have been known to dive to depths greater than 500 feet. They are primarily carnivorous and feed on a variety of food items such as shrimp, crabs, sea urchins, jellyfish and gastropods snails. They are also known to eat algae and seagrasses.

Olive ridleys are globally distributed in the tropical regions of the South Atlantic, Pacific, and Indian Oceans. As is the case with other sea turtle species, olive ridleys often migrate great distances between feeding and breeding grounds. Nesting occurS in at least 40 countries worldwide. Solitary nesting occurs extensively throughout this species’ range; arribadas occur only in the eastern Pacific and northern Indian oceans.

In the Wider Caribbean Region, olive ridleys nest primarily in the Guianas, with the largest nesting colonies located in Brazil, French Guiana, and Suriname. Relatively minor nesting occurs in Guyana and occasional nesting is reported in Trinidad and Tobago, Curaçao, and other southern Caribbean locations. According to Dow et al. (2007), nearly half (45 of all nesting sites support fewer than 25 crawls per year; only 8of sites are associated with unknown crawl abundances.

Status and distribution of the Olive Ridley, Lepidochelys olivacea, in the Wider Caribbean Region 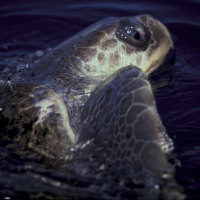 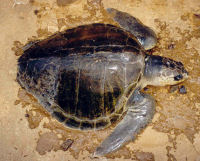 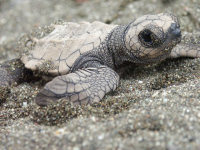 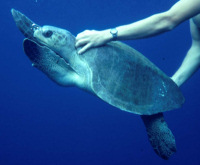 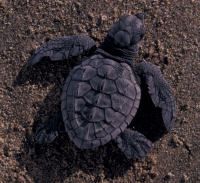