The Wildlife Unit of the Dept. of Natural Resources & the Environment, THA has the responsibilities for Wildlife Management which include:
. Sea Turtle Conservation via Outreach and Education, Monitoring, and Protection by Game Wardens through Enforcement of the Conservation of Wildlife Act chap. 67:01.
. Encourage the development of new Community Based Organizations (CBOs), and provide technical support to current CBOs
. Provide training development through Workshops

From a legislative standpoint, the conservation of marine turtles in Trinidad and Tobago is hampered by a jurisdictional conflict between two different pieces of legislation, one that provides complete protection and the other that establishes an open season permitting the killing of turtles during five months of the year. This conflict gives rise to confusion as to the rules that apply and, thus, the protections afforded and by whose authority. In 2004, in a court matter related to marine turtles, the presiding magistrate ruled that the Fisheries Act takes precedence over the Wildlife Act, owing to the fact that it specifically names marine turtles and the Wildlife Act does not (S. Poon and N. Nathai-Gyan, Forestry Division-Wildlife Section, in litt., 30 August 2004).

The Conservation of Wild Life Act (Act 16 of 1958, amended by Act 14 of 1963), Chapter 67:01 of the Laws of Trinidad and Tobago, provides complete protection against wounding, killing, and acts of harassment for “protected animals” (defined as any animal not specified or mentioned in the Second or Third Schedules of the Act). This would appear to include all species of marine turtle, as they are not listed on either of those schedules. The Act protects all life stages (“animal” being defined as mammal, bird or reptile and including eggs, carcass, meat, nest or young thereof). The penalty for hunting protected animals without a licence is 1000 Trinidad and Tobago dollars (TTD 1000) or imprisonment for three months. In addition, the Act provides for game sanctuaries and a wildlife conservation committee and for game wardens and honorary game wardens authorized to act as enforcement officers (Fournillier and Eckert, 1998).

Section 4 of the Fisheries Act of 1916 (Chapter 67:51 of the Laws of Trinidad and Tobago) and subsequent amendments of 1966 and 1975 empower the minister responsible for fisheries to make regulations to prescribe mesh size of nets, to restrict the size of fish, shrimp, crabs and turtles caught and prohibit their sale or prevent the catching of these species either absolutely or by season or area (Jobity, 2004). The 1975 Protection of Sea Turtle and Turtle Eggs Regulations, promulgated under Section 4 of the Fisheries Act, stipulate that:

Offenders of these provisions are liable, on summary conviction, to a fine of TTD2000 and imprisonment for six months. In addition, the Act stipulates that “it is the duty of the Fisheries Officer and any person authorized in writing by him to do so, subject to any general or special directions given by the Minister, to carry out the provisions of this Act”. A bill that has been before Parliament for several years revises the Fisheries Act to provide complete protection of marine turtles, but this has yet to be adopted (FDWS, 2002).

Section 2 of the Forests Act (Chapter 66:01 of the Laws of Trinidad and Tobago) provides authority for restricting access to certain areas designated as Prohibited Areas. Entry into these areas is allowed only on the basis of permits issued from the Forestry Division and these permits are issued with a set of mandatory conditions (Fournillier and Eckert, 1998).

The Marine Areas (Preservation and Enhancement) Act (Chapter 37:02 (No. 1 of 1970, as amended in 1973) provides for marine areas to be protected as restricted areas, so as to preserve natural beauty, protect flora and fauna, promote enjoyment of the area and promote scientific research (UNEP, 1996). Such areas are to be set aside as no-fishing zones (where “fish” are defined to include corals, crabs, lobsters, shrimps, turtles, turtle eggs and any species of marine fauna), with entry into the area prohibited except with written permission by persons authorized to act on the Minister’s behalf. Permissions are subject to conditions and anchoring sites may only be designated through notification by the relevant minister (Fournillier and Eckert, 1998). The Act is currently applied only to the management of coral reefs (Jobity, 2004).

The Fisheries (Conservation of Marine Turtles) Regulations of 1994 require all semi-industrial and industrial trawl fleets to use turtle excluder devices (TEDs) on their nets to reduce the incidental capture of turtles (Fourniller and Eckert, 1998). Other regulations specify TEDs which may be used and the resuscitation of marine turtles incidentally captured. These regulations are export-driven, in that annual certification of the national marine turtle protection programme by the US Department of State is required for continued access of locally caught shrimps to US markets (Jobity, 2004).

Nathai-Gyan, N. 1984. Marine Turtle Management in Trinidad and Tobago with Specific Reference to the Leatherback Turtle, Dermochelys coriacea. Report to the Wildlife Section-Forestry Division, Government of Trinidad and Tobago. 17 pp. 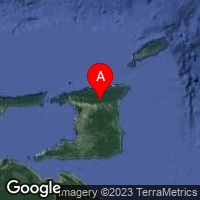 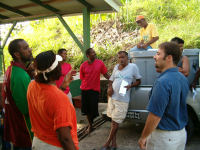 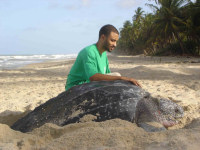 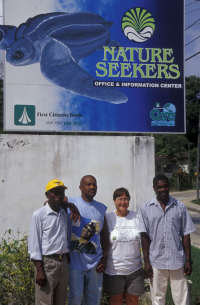 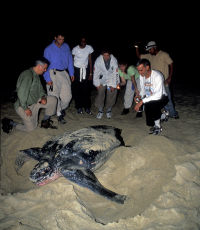